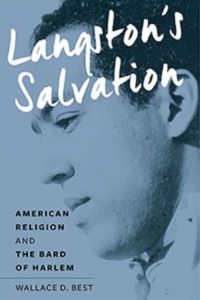 American Religion and the Bard of Harlem

In Langston’s Salvation, Princeton University Religion scholar Wallace D. Best offers an important evaluation of the place of religion in the work of the great poet of the Harlem Renaissance, Langston Hughes. Langston’s Salvation is not strictly a religious biography of Hughes, but rather a study of how Hughes engaged with religion as an intellectual and how he thought theologically. Hughes was raised in the AME Church, and as an adult wrote about religion extensively, particularly in his poetry. Hughes vocally insisted that he was not an atheist or antireligious, and Best is able to document his complex attitude towards faith. As Best observes in the book’s preface, “Hughes seemed to have existed somewhere between a religious past and a present that was always in flux on matters of God, faith and the Church.”

“[A] meticulous account of Hughes’s religious provocations in his literary work…Offering astounding historical and literary analysis to some of his widely popular and some of his lesser -known works such as “The Negro Speaks of Rivers” and Tambourines to Glory respectively, Best explicates Hughes’s works to explore the religious orientation in his writings.”—Black Perspectives

“As Wallace Best portrays him in this stunning, brilliantly argued and written work, Langston Hughes is a poet and prophet who spoke to the deepest dilemmas of African American Christianity in the uncompromising language of religious and artistic modernism. The road to Langston’s “salvation” was not straight, and as he charts its course over time, Best enlarges the field of American religious history and the meaning of modern ‘religion’ itself.” —Robert A. Orsi, Professor of Religious Studies and History, Northwestern

“With close readings of Langston Hughes’s poetry and with finely tuned arguments about the place of religion during the early twentieth century, Wallace Best provides what none has offered before: he shows the beautiful mind of Langston Hughes as a ‘thinker about religion.’ Langston’s Salvation heralds a new day, perhaps even a renaissance, not only in the study Hughes and his poetry, but also of liberal religion in the United States. It is impossible to read Langston’s Salvation and fail to wonder what other great writers of the past have to offer if we follow Best’s lead and approach them as thinkers about religion. This book is like Hughes’s poetry: an invitation to see more than what’s on the surface.”—Edward J. Blum, author of W. E. B. Du Bois, American Prophet

Wallace Best is a member of the department of religious studies at Princeton University, where his research and teaching center on African American religious history, religion and literature, and gender and sexuality and womanist theology.