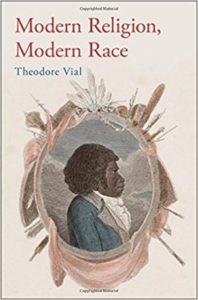 Theodore Vial calls religion and race “conjoined twins” in the first line of his recent book,
Modern Religion, Modern Race. These two concepts were born together and became key conceptual categories that have shaped the modern world. In the past, scholars charting the intellectual genealogies of the ideas of race and religion have often stopped at the enlightenment, but Vial persuasively argues that to fully understand the development of both concepts, post-enlightenment Germany needs to be considered as well. The book offers new perspectives on the writings and thoughts of a number of nineteenth-century thinkers, including Immanuel Kant, Johann Gottfield Herder, Friedrich Schleiermacher and Max Müller. Ultimately, Vial concludes that race cannot be disentangled from the study of religion.

“Theodore Vial’s groundbreaking text on religion, race, and modernity is the most insightfully thought-out, clearly written, and invitingly compelling of all the recent publications on this subject. Clarity of argument represents clarity of thinking. And his, indeed, is a new voice in the field. He proves to us what we’ve all missed: the post-Kantian context and the decisiveness of language in how the West wedded race and religion.”-Dwight N. Hopkins, author of Being Human: Race, Culture, and Religion

“Modern Religion, Modern Race is a smart, nuanced, and accessible study of the birth of the twin concepts of ‘religion’ and ‘race’ in the modern world. With historical sensitivity and philosophical acumen, Theodore Vial traces the simultaneous development of these two concepts and brings his analysis to bear upon the contemporary, and often violent, ways in which these ideas continue to shape our world. Readers have much to gain from this thoughtful study.”-Leora Batnitzky, author of How Judaism Became a Religion: An Introduction to Modern Jewish Thought