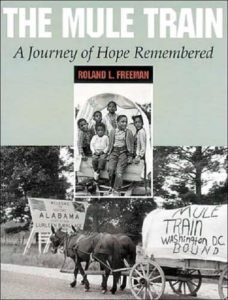 A Journey of Hope Remembered

The Mule Train, about 150 people in twenty mule-drawn wagons from Marks, Mississippi, was determined to make the nation aware of the plight of America’s poor. This was the start of the Poor People’s Campaign, created by Dr. King shortly before he was assassinated. Both The Mule Train and its origin is now mostly forgotten, but The Mule Train commemorates it in this collection of photographs by Roland Freeman and others accompanied by excerpts from local and national newspapers.

An article from NPR details how Dr. King first got the idea for The Mule Train:

‘He saw a teacher, you know, carve up an apple and give it to about eight kids — a slice each — and he was in tears,’ she says. ‘He had to leave the center.’

Edelman brought members of Congress, including Sen. Robert Kennedy, to see the deprivation firsthand, but got little traction on poverty programs. She says Kennedy encouraged her to get King to put more focus on the issue. She says he loved the idea.

‘I told him that I’d just seen Robert Kennedy and he had seen the hunger of children in Marks,’ Edelman says. ‘Kennedy said bring the poor to Washington and he lit up like a lightbulb.’

From there King moved forward on organizing the Poor People’s Campaign.

‘The vision was that this mule train would go all the way from Marks Miss., the poorest hamlet in the poorest state of the country, all the way to Washington,’ says Georgetown University law professor Sheryll Cashin. ‘The mule and the covered wagons as a symbolic message of the black sharecropper.'”