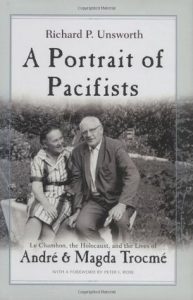 Le Chambon, the Holocaust, and the Lives of André and Magda Trocmé

During World War II, the southern French town of Le Chambon-sur-Lignon and its surrounding villages became a haven for Jews and others in flight from Nazi roundups, where they could regroup before being hidden or led abroad. This was in no small part due to André and Magda Trocmé, two individuals who made nonviolence a way of life. In A Portrait of Pacifists, author Richard Unsworth uses the Trocmés’ unpublished memoirs, interviews, and original research in order to detail the couple’s role in the history of pacifism before, during, and after the war.

The Trocmés’ courage during World War II has been well documented in books and film, yet the full arc of their lives—the impulse that led them to devote themselves to nonviolence and their extensive work in the decades following the war—had yet to be examined. Unsworth rectifies this by tracing their mission of building peace by nonviolence throughout Europe to Morocco, Algeria, Japan, Vietnam, and the United States. Regardless of which nation was condoning violence, shaping international relations, or pressing for peace, both André and Magda remained driven by conscience to make nonviolence the hallmark of their life’s work.

“A compelling and engaging narrative that tasks any reader to think about the role and reality of violence within their world. More to the point, it tasks anyone interested in nonviolence to think about the Christian call to become peacemakers in the world as an uncompromising demand.”—Peace and Justice Studies Journal

“A beautifully written and long overdue biography of Magda and André Trocmé, two of the prime movers in a World War II rescue mission in south-central France that saved the lives of an estimated 3,500 refugees. Working with thousands of unpublished pages, Unsworth probes deeply into the psyche of these two very different internationalists from whose biographies emerge a history of nonviolence, conscientious objection and pacifism in the twentieth century.”—Patrick G. Henry, Whitman College

“An absolutely wonderful new biography of two seminal figures in the international history of nonviolence. Unsworth draws on rich archival research and personal interviews, skillfully weaving a narrative of these two exceptionally courageous and inspiring individuals. A comprehensive and engagingly written account, and a ‘must-read’ for anyone interested in nonviolence, the resistance to Nazism, and more broadly the meaning of a life uncompromisingly lived according to the highest ethical ideals.”—Micheal D. Bess, Vanderbilt University Religion, Theology, and the Holocaust