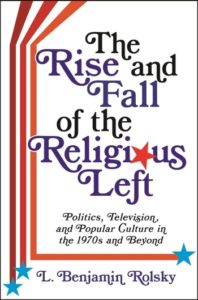 Politics, Television, and Popular Culture in the 1970s and Beyond

In The Rise and Fall of the Religious Left, L. Benjamin Rolsky challenges the idea of an American culture war between the religious right and the secular left by examining the rise of the religious left through the story of television writer and producer Norman Lear. While Protestant conservatives have been cast as the instigators of such warfare, Rolsky examines the ways in which American liberalism has helped shape cultural conflict since the 1970s, especially through the realm of pop culture.

Lear was not necessarily known as a political figure in his time, but was spurred to found the liberal advocacy group People for the American Way in response to the rise of the religious right. Rolsky shows how prime-time television, which included works created by Lear, became a focus of political dispute and demonstrates how Lear’s emergence as an interfaith activist catalyzed ecumenical Protestants, Catholics, and Jews who were determined to push back against conservatism’s ascent. He offers engaged readings of Lear’s iconic sitcoms and published writings, considering them as an expression of what he calls the spiritual politics of the religious left. By using Lear and his shows as an example, Rolsky is able to examine the foundational roles played by popular culture, television, and media in America’s religious history.

“Rolsky demonstrates how Norman Lear, the renowned television producer of classic shows like All in the Family, offers a window into the evolution of the religious left in the 1970s and its complex relationship with the moral majority. A fascinating and intriguing history of the intersection between popular culture, religion, and American politics.”—Julian E. Zelizer, coauthor of Fault Lines: A History of the United States Since 1974

“Benjamin Rolsky intends to prod and provoke, and he does so through his sophisticated analysis of the effect of Lear’s work. This is a strong, important, and innovative work. The framing of Lear within the ‘politics of religious liberalism,’ the explanation of the creation and workings of a mainstream Protestantism that saw itself as a sort of caretaker of the nation, and the challenging and intellectually complex thesis pursued here all highly recommend this as an important work that should draw attention, discussion, and debate.”—Paul Harvey, author of Christianity and Race in the American South: A History

“For some who have taken a hiatus from politics and religion, The Rise and Fall of the Religious Left Politics, Television, and Popular Culture in the 1970s and Beyond by L. Benjamin Rolsky is a must read; a companion to the inevitable upheaval that is on the horizon. If there is one political book that you should read in 2020…it’s this one.”—Eraina Davis, Chicago Now