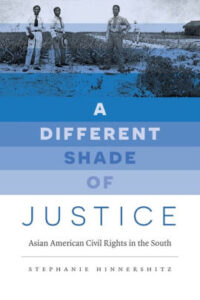 Asian Americans often fell into a middle ground in the Jim Crow South, for although they were not black, they were also not considered white, and thus were subject to school segregation, antimiscegenation laws, and discriminatory business practices. In A Different Shade of Justice, author Stephanie Hinnershitz explores the lives of Chinese, Filipino, Japanese, and, later, Vietnamese and Indian Americans in the South, and how they faced obstacles similar to those experienced by African Americans in their fight for civil and human rights.

As Asian Americans attempted to establish themselves in the South, they found that institutionalized racism thwarted their efforts time and again. In order to combat this, they organized carefully constructed legal battles that often traveled to the state and federal supreme courts, starting with the formation of Chinese and Japanese communities in the early twentieth century and going up through Indian hotel owners’ battles against business discrimination in the 1980s and ’90s. Hinnershitz draws from legislative and legal records as well as oral histories, memoirs, and newspapers in order to tell the story of how Asian American political actors and civil rights activists challenged existing definitions of rights and justice in the South.

“Readable and engaging, and recommended to anyone interested in the intersections of race, gender, ethnicity, and labor in the United States.”—Arkansas Historical Quarterly

“Provides a welcome addition to a flourishing body of scholarship on the experiences of Asian Americans and other immigrant groups in the U.S. South. This scholarship has challenged assumptions that the South was largely excepted from national histories of immigration, and it complicates understandings of racial identity in the region.”—Journal of Southern History

“This valuable work presents sophisticated and nuanced insight about Asians in the post-Civil War South . . . A welcome volume.”—Journal of American History