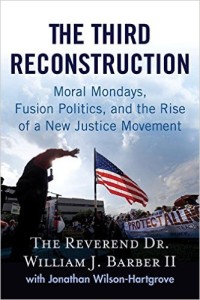 A call to action to a moral revolution

The Third Reconstruction: Moral Mondays, Fusion Politics, and the Rise of a New Justice Movement is Rev. Dr. William J. Barber’s memoir of the 2013 grassroots movement in North Carolina that protested restrictions on voting and demanded a make-over of the state government. This memoir was written along with PLT Contributor Jonathan Wilson-Hartgrove and is set to come out in January 2016.

In his review of The Third Construction, PLT Contributor Peter Hartwig writes:

Barber tells the tales of his father, who moved his family back to North Carolina to fight for desegregation in the school system; of his saintly grandmother, who taught him not to help folk, but to ‘hope’ folk, to bring hope into their lives; of miraculous healings and angelic visitation. But it quickly becomes clear that the preacher has more to share than just memoirs. Through Wilson-Hartgrove’s prose, the Reverend Barber recounts not only his own biography, but also the grand and multi-layered story in which he has spent his life. It is the story of fusion politics, a coalition of unlikely friends all laboring for social justice in North Carolina; the latest chapter in the long story of liberating faith in the South; the birth-story of a grassroots moral revolution that is spreading across the entire nation. It is the story of the Gospel saving the soul of America.