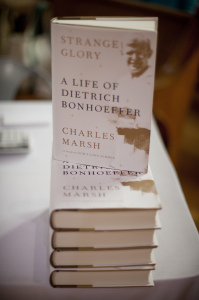 Charles Marsh’s Strange Glory has received the Christianity Today’s 2015 Book Award for history and biography. The honor is given to the books most likely to shape evangelical life, thought, and culture.

“Strange Glory is the best book in English on Bonhoeffer,” notes Douglas Sweeney, Professor of Church History, Trinity Evangelical Divinity School. “It is honest about his failings (both personal and public) and forthright about his distance from modern readers.”

Willie James Jennings has received the prestigious 2015 Louisville Grawemeyer Award in Religion for his book, The Christian Imagination: Theology and the Origins of Race.

In his book, Jennings explores Christianity’s contribution to segregation and racism in America beginning in colonial times. He names broken relationships between people and land and rifts between Christianity and Judaism as key factors, arguing that a renewal of Christian imagination must take place to heal those divides.

“His book contains brilliant flashes of insight into Christianity and racial oppression,” said Shannon Craigo-Snell, a Louisville Presbyterian Theological Seminary professor who directs the award. “He also sheds light on how Christianity has the potential to foster more just and respectful relations between religious and racial groups.”

Jennings is currently an associate professor of Theology and Black Church Studies at Duke Divinity School. A participant in the Project on Lived Theology’s SILT 2013, Jennings delivered a presentation entitled, “Theology’s Crippled Imagination.” An edited version of his SILT paper will be included in the forthcoming Lived Theology: New Perspectives on Method, Style, and Pedagogy in Religious and Theological Studies.

For more information about Jennings and the Grawemeyer Awards, click here. To watch a recording of Jennings’s 2013 SILT presentation, click here. 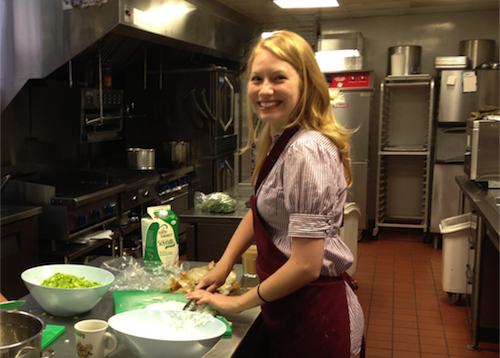 The Summer Internship in Lived Theology is an immersion program designed to compliment the numerous existing urban and rural service immersion programs flourishing nationally and globally by offering a unique opportunity to think and write theologically about service.

Read more about the internship and download the application document here.

The 2015 Graduate Colloquium in Scripture, Interpretation, and Practice (SIP) welcomes submissions of original research from graduate students on the topic “Weaponizing Scripture?” This conference will explore cases, both historical and contemporary, in which scripture serves as a resource for/against the communities that are formed by it, as well as how it is instrumentalized for formational, popular, political, and/or polemical agendas. It further seeks to uncover ways that scripture transforms the character of the debates and purposes for which it is deployed. Accordingly, papers could examine such cases intra-traditionally, ecumenically, inter-religiously, or between religious and secular spheres.

The plenary speaker will be Dr. Sohail Nakhooda, a scholar of both Islamic and Christian traditions. He is co­-leader of the Islamic Analytic Theology project at Kalam Research & Media (KRM) in the UAE, in association with the John Templeton Foundation. He was chosen to speak because he provides a unique window into the role of scripture both within religious tradition and in the political and even military spheres.

The second annual Graduate Student Colloquium in Scripture, Interpretation and Practice will be held on March 22nd and 23rd, 2015, at the University of Virginia. Proposals in the form of a 250-word abstract should be emailed to kwfr@virginia.edu by January 23rd, 2015. Acceptance notifications will be sent out by February 5th, 2015. Final papers, not to exceed 2000 words, must be submitted by March 14th, 2015.

For more information, including a list of suggested topics and further description of the conference and Dr. Nakhooda, click here. 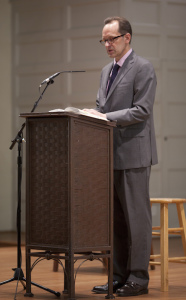 On Sunday, December 7, Charles Marsh will lead the Library Class at the Westminster Presbyterian Church in Charlottesville in a discussion of Strange Glory. The lecture will explore the many roles that formed Bonhoeffer’s identity in an attempt to answer the question, who was this man whose legacy still permeates our theological conversations today?

The class will be held from 9:30-10:30 am and the public is invited to attend. For venue details and directions, click here. To find future book events led by Charles Marsh, click here.

On Thursday, December 4, at 7:30 p.m., Willis Jenkins will speak on the ethics of food on the Common Grounds, located at 480 Rugby Road. Jesse Straight of Whiffletree Farm in Warrenton, Virginia, will join him and share about his own work. Several other local producers and artisans will also attend to sell their food, arts, and crafts. The event will aim to teach the practices of ethical shopping in the spirit of the upcoming holiday season. Theological Horizons and the Project on Lived Theology will be sponsoring the salon. The public is invited and admission is free.

Jenkins is an associate professor of religion, ethics, and environment and the director of the graduate program at the University of Virginia, where he also earned his M.A. and Ph.D. degrees. Prior to joining the U.Va. faculty, Jenkins was an associate professor at Yale Divinity School and has been involved with the Project on Lived Theology since he was a graduate student. He was recently presented with the 2014 American Academy of Religion Award for Excellence for his book, The Future of Ethics: Sustainability, Social Justice, and Religious Creativity (Georgetown University Press, 2013).