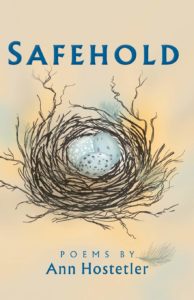 In Safehold, Ann Hostetler has collected and published her poems that communicate what it means to endure a crisis of security. The topics are varied, ranging from 9/11, to the death of both her parents, to the election of the 45th president, but all the poems speak to existential dilemmas Hostetler has dealt with in her life, and ways she has learned to cope with outcomes out of her control. Her poems respond to such  questions as, “How do you live your everyday life, treasuring what you love while embracing painful things that you wish hadn’t happened?”

While Hostetler does not consider herself a Christian poet or a Mennonite poet, which is the faith she was raised in, her poems are undeniably influenced by her upbringing, causing this book to be acclaimed as a “true work of Christian poetry.” This book, and Hostetler’s poems as a whole, invite a thought-provoking, spiritual outlook on dealing with a loss of assurance.

“Hostetler, who has done so much for Mennonite literature as teacher and editor, now gives us a second collection of her own plainspoken poems. Their message? Refuse to be shunned. Breathe. Build an ark. Seek forgiveness not perfection. Write what you love. Again and again, she calls us to everyday mindfulness in the midst of our grief: failing parents, worrisome children, the world’s uncertain course. Honest and wise, this book is a tonic for our times.” —Julia Spicher Kasdorf, Author, Shale Play: Poems and Photographs from the Fracking Fields

“Hostetler gathers her living and dead into these poems, generations of seekers and travelers, and seats them at the table, telling stories that serve as a safehold against the confusion and violence of the world, while also using ‘the bellows of the breath’ to praise beauty, to comfort with a failing yet steadfast love. The poet confesses, ‘All my life I’ve tried to live as though / the body were the soul, ‘ and to that end Hostetler’s rich poems are incarnational meditations so very necessary for survival. —Todd Davis, Author, Native Species and Winterkill

“Safehold teaches what I never want to forget: that all people are my neighbors, that my mother is my original love, that any child shunned, slaughtered, shamed is my child. Hostetler has written a true work of Christian poetry: these poems incarnate Christ’s elegant, dark hand, unknowable and open, ready to carry us all.” —Rebecca Gayle Howell, Author, American Purgatory 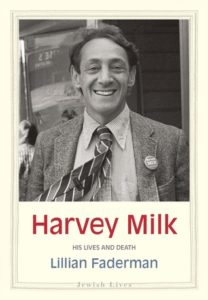 His Lives and Death

In Harvey Milk: His Lives and Death, author Lillian Faderman documents the life, and the untimely death, of the first openly gay man elected to public office in California. Harvey Milk created quite a stir when he was elected to the San Francisco Board of Supervisors in 1977, but he was not able to serve even a full year in office before he was shot by a homophobic fellow supervisor at the age of 48.

Although Harvey Milk was eloquent, charismatic, and a smart-aleck, he only became a politician late in his life. Prior to that, he was a schoolteacher, a securities analyst on Wall Street, a supporter of Barry Goldwater, a Broadway theater assistant, a bead-wearing hippie, the operator of a camera store and organizer of the local business community in San Francisco. Harvey was raised Jewish, and he was deeply influenced by the cultural values of his Jewish upbringing, although he rejected Judaism as a religion. In his last five years, he focused all of his tremendous energy on becoming a successful public figure with a distinct political voice, one who championed the rights of gays, racial minorities, women, working people, the disabled, and senior citizens.

Milk’s assassination made him the most famous gay man in modern history; twenty years later Time magazine included him on its list of the hundred most influential individuals of the twentieth century, and in 2009 he was posthumously awarded the Presidential Metal of Freedom.

The Jewish Lives series, which this book is a part of, is a prizewinning series of interpretative biography designed to explore the many facets of Jewish identity. Individual volumes illuminate the imprint of Jewish figures upon literature, religion, philosophy, politics, cultural and economic life, and the arts and sciences.

“This elegantly written and well-researched book recovers the Jewishness that has too often been erased or glossed over in the mythologizing of a gay icon.”—Helene Meyers, Tablet

“The theme that comes through most prominently is Milk’s unflinching courage and forward thinking resolution. I found myself frequently writing in the margin of my copy: ‘So ahead of his time.'”—Peter Marino, Gay and Lesbian Review

“Meticulously researched and beautifully written, Lillian Faderman’s Harvey Milk is a revelation. This insightful work provides context to Milk’s life as a gay icon and illuminates how his experience was deeply informed by his own Jewish identity.”—Cleve Jones, author of When We Rise: My Life in the Movement 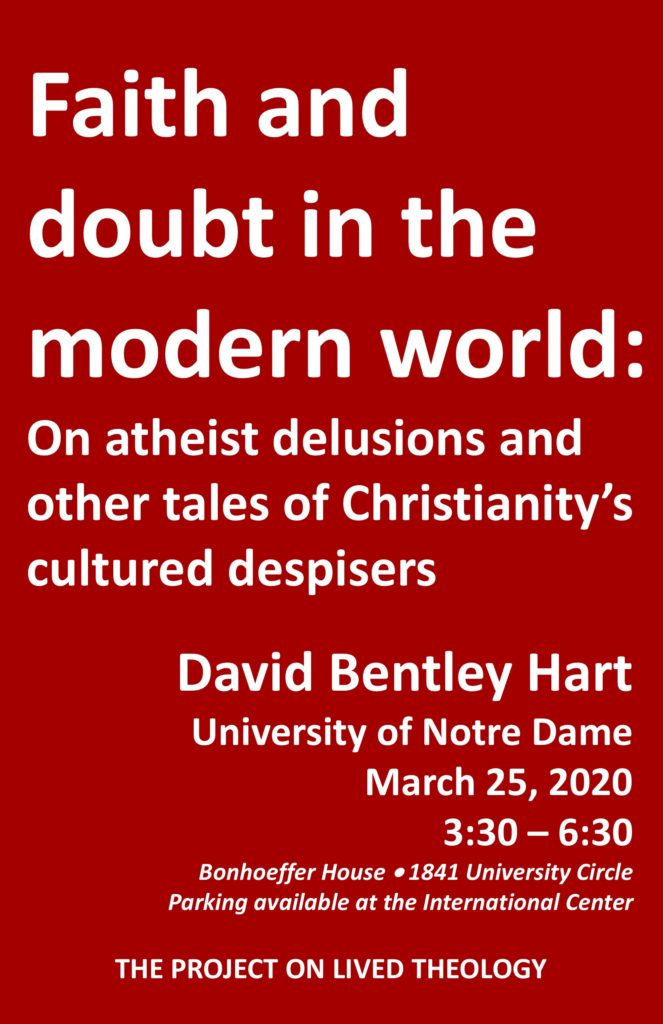 Due to the emergence of COVID-19, based on the guidance and recommendation from UVA Health, the Virginia Department of Health, the CDC and other partners, we have decided to cancel our event with David Bentley Hart. Our top priority is the safety of the members of the University community, and we are taking all necessary precautions to mitigate the risk of infection.

Our mission at the Project on Lived Theology will continue during this time of uncertainty. We will continue to post resources and move forward to support our community in new and creative ways. 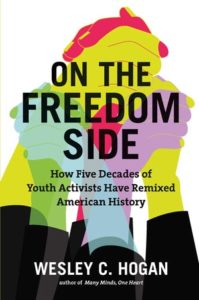 How Five Decades of Youth Activists Have Remixed American History

In On the Freedom Side, author Wesley C. Hogan argues that the future of democracy belongs to young people. In order to back up this claim, he cites multiple youth-led organizations throughout American history, starting with Ella Baker and the Student Nonviolent Coordinating Committee in the 1960s. He also includes more recent groups, such as the Dreamers who are fighting for immigration reform; the Movement for Black Lives that is demanding a reinvestment in youth of color and an end to police violence against people of color; and the International Indigenous Youth Council, water protectors at Standing Rock who fought to stop the Dakota Access Pipeline and protect sovereign control of Indigenous lands.

Hogan reveals how the legacy of the civil rights movement has influenced young people, especially those who are often left at the margins of US society, to take a stand for the causes they believe in. This book centers their stories in an “activist mix tape” that provides lively, fresh perspectives on the promise of twenty-first-century U.S. democracy.

“At a time when too many of us are simply cursing the darkness, Hogan has shone the light of history on the often-invisible youth movements that fueled positive change in the past . . . and that continue to energize us today.”—Judy Richardson, SNCC veteran and coeditor of Hands on the Freedom Plow: Personal Accounts by Women in SNCC

“Hogan provides a way for us to explore the evolution of social justice movements, revealing how activists take what they learn from the ‘Movement Decade’ of the 1960s and build upon it.”—Tracy E. K’Meyer, author of From Brown to Meredith: The Long Struggle for School Desegregation in Louisville, Kentucky, 1954–2007

“An informed, passionate, and hopeful book that considers the cutting-edge movements of the late twentieth and early twenty-first centuries. Hogan introduces us to the multiracial, intergenerational, and intersectional activists at the heart of contemporary freedom movements, noting their own acknowledged debts to the egalitarian spirit of the Black Freedom struggle and its most egalitarian practitioner, Ella Baker.”—Dan Berger, author of Captive Nation: Black Prison Organizing in the Civil Rights Era 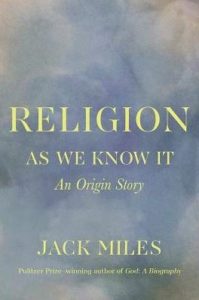 In this slender volume, scholar of religion Jack Miles explains the origins of the comparative study of religion, and how the concept of religion came to be thought of as being distinct from other human spheres of activity. In his essay, which was originally the introduction to the Norton Anthology of World Religions, Miles makes an eloquent case for the necessity of considering the worldviews of others with compassion and understanding. At the end of the volume, Miles explores his own faith, explaining how he understands religion’s place in the modern world.

“Any student of theology will be enlightened by this deeply satisfying work.”—Publishers Weekly (starred review)
“This is an exceptional work that challenges and rewards careful reading and thought. It belongs in every library.”—Booklist (starred review)
“Jack Miles has written the perfect first book for religious studies beginners. He starts with the widely held American understanding of religion but ends arguing brilliantly that inescapable human ignorance creates the possibility of welcoming the new, the unexpected, even the religious. Our self-absorbed age needs this book.”—Mark C. Taylor, Columbia University
“The question of the origin of religion has rarely been addressed with the erudition and eloquence of Jack Miles. Drawing on a remarkable wealth of sources across time and place, he offers much for us to ponder in an essay that is at once highly learned and deeply personal.”—Donald S. Lopez Jr., University of Michigan