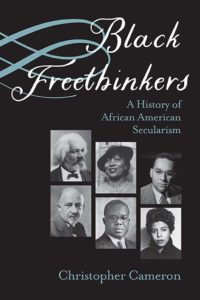 A History of African American Secularism

There are many histories of African-American religion, but in this new book, historian Christopher Cameron charts the largely overlooked impact of irreligion on two centuries of black intellectual life. Cameron’s work challenges the idea that atheism, agnosticism, and religious skepticism were exclusively the concerns of whites. He documents how a tradition of black freethought shaped the careers of well known figures, including Frederick Douglass, Zora Neale Hurston, and James Forman. Cameron makes a compelling case that to understand the effects of religion, scholars also need to be attentive to those who rejected it.

“Cameron offers a compelling survey of African American freethought across two centuries. Rather than treating secularism as a regulatory discourse of modern statecraft, Cameron unpacks the alienations, arguments, and aspirations of black secularists themselves. He brings depth and clarity to an aspect of African American religious history rarely given the sustained attention it deserves.” —Leigh Eric Schmidt, author of Hearing Things: Religion, Illusion, and the American Enlightenment

“In African American intellectual history, religious skepticism, agnosticism, atheism, and secular humanism have long been lost in the shadow of the black church. Taking a closer look at the evidence, Cameron shows that the experience of slavery and the degradations of proslavery Christianity also led some enslaved and free blacks in the nineteenth century to varieties of unbelief. This tradition laid a foundation for the next century, from the Harlem Renaissance to the Black Power movement and beyond. With deft readings of a host of fascinating figures, Cameron shows how black freethinkers made important interventions in American culture.” —Christopher Grasso, author of Skepticism and American Faith: From the Revolution to the Civil War