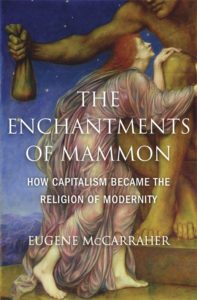 How Capitalism Became the Religion of Modernity

In The Enchantments of Mammon: How Capitalism Became the Religion of Modernity, Eugene McCarraher argues that capitalism is full of sacrament, whether or not it is acknowledged. This runs counter to the traditional view of capitalism as part of the “disenchantment” of the world, stripping material objects and social relations of their mystery and sacredness.

McCarraher contends that capitalist enchantment first flowered in the fields and factories of England and was brought to America by Puritans and evangelicals whose doctrine made ample room for industry and profit. Later, the corporation was mystically animated with human personhood,and by the twenty-first century, capitalism had become thoroughly enchanted by the neoliberal deification of “the market.” In this impassioned challenge, McCarraher makes the case that capitalism has hijacked and redirected our intrinsic longing for divinity—and urges us to break its hold on our souls.

“With this book McCarraher aspires to nothing less than a history of the soul under capitalism. Far from living in a secular, disenchanted world, he argues, ours is a world of ‘misenchantment,’ in which longings for communion are perverted into a religion of plunder and technological control. Capitalism emerges here not as a system of market exchange or class domination but as an affront to the divine creation of which we are a part. An astonishing work of history and criticism.”—Casey Nelson Blake, author of The Arts of Democracy

“A tour de force. McCarraher argues that capitalism is a successor faith, rather than a successor to faith. The capitalist faith in this telling is a heretical, blaspheming Black Mass of perverse sacramentality that sanctions domination by pretending to the status of immutable, impersonal laws of nature. In the world of economic enchantment masquerading as hard-eyed realism, McCarraher urges us to keep open an imaginative window through which to glimpse alternatives. His magnificent intellectual history recovers many such opportunities and invites us to appraise them with fresh eyes.”—Bethany Moreton, author of To Serve God and Wal-Mart

Eugene McCarraher is an associate professor of humanities and history and the associate director of the honors program at Villanova University. A former Charles Ryskamp Fellow of the American Council of Learned Societies (2005-2006), he has written for Books and Culture, Commonweal, Dissent, In These Times, The Nation, the Chicago Tribune, The Hedgehog Review and Raritan.