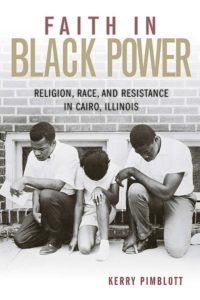 In Faith in Black Power, Kerry Pimblott discusses the impact of religion on the black power movement through the story of Cairo, Illinois. In 1969, nineteen-year-old Robert Hunt was found dead in the Cairo police station, and while authorities ruled it a suicide, many members of the African American community believed that Hunt had been murdered. This event triggered a wave of protests across the city, and Cairo suddenly emerged as an important battleground for black survival in America and became a focus for many civil rights groups, including the NAACP.

Other groups began mobilizing in Cairo as well, including the United Front, a black power organization founded and led by Reverend Charles Koen. Pimblott challenges conventional narratives of the de-Christianization of the movement by discussing the ways in which black churches supported and shaped the United Front, thereby revealing that Cairoites embraced both old-time religion and revolutionary thought. She also investigates the impact of female leaders on the organization and their influence on young activists, offering new perspectives on the hypermasculine image of black power.

This groundbreaking book contributes to and complicates the history of the black freedom struggle in America by not only adding a new element to the study of African American religion, but also by illuminating the relationship between black churches and black politics during this tumultuous era.

“By attending so carefully to the social history of Cairo, the author forces a reconsideration of older arguments about the relationship of religion, civil rights, and black power, that have grown stale and usually depend on the statements of national figures such as King, Stokely Carmichael, and so forth. What we get here is an intensive on-the-ground examination of how religion and the rhetoric and practice of black power actually operated in a local community that had a very particular history, and one that did not look like the Deep South familiar from the civil rights movement.”―Paul Harvey, Professor of History, University of Colorado, Colorado Springs

“Pimblott’s Faith in Black Power offers a new and unique interpretation of the relationship between the Black church and the Black power years of the Civil Rights Movement. Rooted in an enormous amount of newly discovered primary sources, this path-breaking book contributes greatly to our understanding of the second phase of the African American led Freedom struggle.”―Journal of Pan African Studies

“Among the greatest strengths of Faith in Black Power is the depth of its detail. By diving into the intricacies of movement making in Cairo, Pimblott is able to offer more nuanced and historically specific analyses of two categories of particular interest to scholars of religion: ‘black theology’ and ‘the black church.’ Discussions of black theology can sometimes read as though they are essentially intellectual debates set in seminaries. Faith in Black Power takes those discussions into the streets, as it were, and emphasizes the ‘United Front leaders [who] constructed a grassroots black power theology and movement culture capable of bridging intraracial divisions and sustaining the movement over the long haul.'”―The Journal of Religion