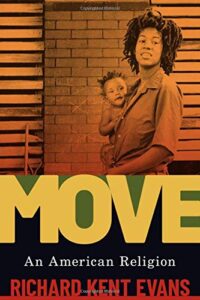 The debate over what does and doesn’t count as a religion has been ongoing for centuries, and in MOVE, author Richard Kent Evans attempts to answer this question using the fascinating story of a little-known group. It was called MOVE, and while the members of the group considered it a religion, the courts saw it as anything but.

MOVE was started in Philadelphia in the early 1970s by a man named John Africa. It was a small group, and it consisted of mainly African Americans. in 1985, the Philadelphia Police Department attacked a home shared by “MOVE people,” using tear gas, ten thousand rounds of ammunition, and improvised explosives. Most infamously, a police officer riding in a helicopter dropped a bomb containing C-4 explosives onto the roof of the MOVE house, starting a fire. Officials allowed the fire to spread in hopes of chasing the MOVE people out of the house, and police officers fired upon those who tried to escape the flames. Eleven MOVE people died in the attack, including John Africa. Five of those who died were children.

The story of MOVE has been virtually forgotten for years. In this book, Evans dives deep into how we decide what constitutes a genuine religious tradition, and the enormous consequences of that decision.