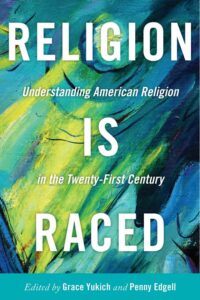 When white people of faith act in a specific way, it is often attributed to their religious commitments. But when religious people of color act in specific way, it almost exclusively attributed to their racial positioning. In Religion is Raced, authors Grace Yukich and Penny Edgell argue that all religion must be acknowledged as a raced phenomenon, even though America tends to look at religion only through the lens of white Christians.

This book offers a new model for thinking about religion, one that emphasizes how racial dynamics interact with religious identity, and attempts to bring the discussion of race and religion into the mainstream. It draws from a variety of religious traditions, including Buddhism, Islam, Judaism, Protestantism, and even atheism, in order to better demonstrate the roles that religion and whiteness play in politics and everyday life. Yukich and Edgell argue that when we overlook the role race plays in religious belief and action, it also causes us to overlook the way race might influence religiously motivated political and public action.

“Challenges the unspoken narrative of whiteness that has shaped studies of US religion. Writing from various disciplinary perspectives, the authors collectively chart a more productive way forward, one that begins with very different (and more empirically accurate) assumptions. A state-of-the-art work and a shot across the bow.” —Paul Harvey, author of Christianity and Race in the American South: A History

“An important collective endeavor that will leave its mark as an essential resource for understanding contemporary American religion. Yukich and Edgell bring together several of the best scholars in the sociology of religion in order to shed new light on neglected racial (but also religious, ethnic and gendered) aspects of religion as it is lived in the United States today. This is a crucial and overdue corrective and a significant achievement.” —Michèle Lamont, Harvard University

“An incredibly rich, important and timely book. Yukich and Edgell, along with their powerhouse group of contributing authors, highlight crucial racial underpinnings and underlying organizing principals of contemporary religion and the consequences for social divisions, politics and identities. This book is a cornerstone, one that will shape scholarly work and public conversations for generations.” —Vincent J. Roscigno, Ohio State University