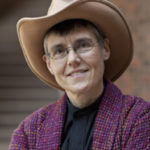 During the mid-1950s and early 1960s, ministers of northern white mainline Protestant churches found in existentialist theology a suitable way to address Americans’ political and private concerns over communism, nuclear war, and the effects of mass culture. Radio programs regularly featured broadcasts of these ministers’ sermons. Was this also the case in the American South where the movement for racial equality was a more pressing public concern?

As a research fellow for the Project on Lived Theology, Heather Warren plans to explore this question by focusing on the southern-centered, Atlanta-based Protestant Hour radio show. Warren will specifically study the years 1953 through 1963, beginning with Americans’ fears over the Soviet Union’s first H-bomb test and ending with the March on Washington.

“Thanks to the Project on Lived Theology, I can now turn my hand to a project that first caught my attention several years ago,” said Warren. “I am excited to mine sources that have barely been touched and to bring these preachers’ messages to our ears so that we can better understand how they lived their faith in complex political and social times. I hope we can learn from these preachers, pitfalls to avoid and practices to appreciate.”

Warren has also authored an essay on Father John A. Ryan for the PLT book Can I Get a Witness? (2019). She also serves as an associate professor in the Department of Religious Studies at the University of Virginia, where she specializes in the history of American religious life and thought from the late-nineteenth century to the present. Her research has also carried her into the field of American religious autobiography.

Warren hopes to write an essay for a double-blind peer-reviewed journal on her Protestant Hour radio show research and to present her findings at a conference with two other scholars working on Protestantism and radio in the twentieth century.