The Project on Lived Theology has accepted eight UVA students to its Undergraduate Summer Research Fellowship in Lived Theology. The fellows will conduct research, think, and write theologically on questions related to the social repercussions of theological commitments. Each fellow will receive a $3,000 stipend. We hope to share details about the 2022 fellowship application process in November or December 2021, so be sure to check our website for any updates.

Project: The role of Christian and Evangelical organizations in uplifting those marginalized by socioeconomic status

“I am a rising fourth year, double majoring in youth and social innovation and English, with a minor in Religious Studies. My journey into the field of religious studies began with a last-minute switch into a prophecy class the spring of my first year, and I’ve found every class I’ve taken since then to be a very fulfilling and integral part of my time at school. On Grounds, I am primarily involved with the Navigators at UVA, and SEEK, an inter-fellowship organization that aims to foster unity and celebrate the diversity present amongst all the Christian organizations at UVA.”

Project: The participation of St. Paul’s Memorial Church (Charlottesville, Va.) in the Civil Rights Movement from 1954 to 1968

“I’m a rising fourth year, majoring in political & social thought and religious studies. At UVA, I am the senior warden of The University Fellowship, the president of the Virginia Interfaith Coalition, a head program director for youth mentoring at Madison House, and an investigator for the University Judiciary Committee. Outside of UVA, I’m an intern with a local nonprofit, The Fountain Fund, and an active member at St. Paul’s Memorial Church. In my free time, I love long walks, chats, and laughs with friends.”

Project: Creation of a digital exhibit on the Civil Rights Movement in Virginia

“I am an undergraduate student at UVA, where I study biochemistry and religious studies. After graduating with the Class of 2021, I will continue research within the UVA Department of Chemistry, investigating the deuteration of pharmaceutical drugs to increase their efficacy and safety. In my free time, I love to exercise, watch movies with close friends, and serve in my local church and community.”

Project: An ethnographic study, with the Blacksburg (Va.) Friends, about how Quaker practice has changed during COVID-19

“I’m a fourth-year religious studies distinguished major at UVA, where I have focused on the spiritual aspects of Himalayan healing traditions. In my spare time, I enjoy backpacking, cooking Tibetan food, and watching B-grade horror films. I look forward to pursuing a career in academia and intend to study Buddhist traditions and philosophy of religion at Harvard Divinity School in the fall.”

Project: Creation of a digital exhibit on the Civil Rights Movement in Virginia

“I am a fourth-year religious studies major at UVA, where I am on a pre-medical track. I serve as president of UVA’s Daniel-Hale Williams Pre-Health Society and as a peer advisor for UVA’s Office of African-American Affairs. I volunteer at The Haven, a multi-resource day shelter in downtown Charlottesville.”

Project: Interviews with Chinese international students at UVA to learn more about the experience of Chinese and Chinese Americans with American Christianity

“I’m a third-year student at UVA, majoring in East Asian Studies. For the past two years, I’ve also been working with the Center for Digital Editing, researching the enslaved community of George Washington’s Mount Vernon and developing digital humanities projects. With this summer fellowship, I’m looking forward to incorporating my interdisciplinary studies of China with my passion for theological scholarship.”

Project: What racial justice (in relation to the murder of George Floyd, the Black Lives Matter movement, and the Atlanta shootings) means to faith

“I am a third year studying kinesiology, and I will be getting my master’s in kinesiology for individuals with disabilities here at UVA next year. In my free time, I enjoy exploring the parks in Charlottesville and paddle boarding. I am so grateful to be a part of the Project on Lived Theology this summer and to learn more about the intersection of faith and life and how I can incorporate faith in how I see the world to make it a more just and equitable place.”

Project: How lived religion has played a role in the Black Lives Matter movement

“I’m majoring in Medical Anthropology, and my hometown is Charlottesville, Virginia. I am involved in The University Fellowship at UVA and The Haven in Charlottesville. In my spare time, I like to play racquetball, go on walks with friends, and bake.”

Thompson has worked closely with the Project on Lived Theology, including participating in PLT’s 2005 Spring Institute for Lived Theology and lecturing on Martin Luther King, Jr.’s work in Memphis with the sanitation workers’ strike, just prior to King’s assassination.

Reparations makes a compelling historical and theological case for the church’s obligation to provide reparations for the oppression of African Americans. Thompson and Kwon articulate the church’s responsibility for its promotion and preservation of white supremacy throughout history, investigate the Bible’s call to repair our racial brokenness, and offer a vision for the work of reparation at the local level. They lead readers toward a moral imagination that views reparations as a long-overdue and necessary step in our collective journey toward healing and wholeness.

“Reparations is an exemplary work of public theology, born of chastened Christian conviction and pastoral anguish,” said Charles Marsh, PLT director and University of Virginia religious studies professor. “Beautifully written and generous in tone, Kwon and Thompson’s book illuminates the costs and joys of discipleship in a nation marked by white privilege and its theological disfigurations.”

“We are at an inflection point in our nation. We can either continue with the racial status quo or earnestly engage in the long-overdue process of repair,” said Jemar Tisby, CEO of The Witness Inc. and author of How to Fight Racism: Courageous Christianity and the Journey toward Racial Justice. “Reparations is a book for this moment. It is a call to action to offer tangible restitution for the historic exploitation of Black labor. While Christians should have been leading the way on this all along, sadly, too many have demonstrated compromise and complicity instead. Kwon and Thompson marshal deep research, theological acumen, and pastoral tenderness to make a timely call for reparations and the dignity of all people.”

Gregory Thompson’s work focuses on race and equity in the United States. He serves as executive director of Voices Underground (an initiative to build a national memorial to the Underground Railroad outside of Philadelphia), research fellow in African American heritage at Lincoln University (HBCU), and visiting theologian for mission at Grace Mosaic Church in Washington, D.C. He is also the co-creator of Union: The Musical, a soul and hip-hop-based musical about the 1968 sanitation workers’ strike. Thompson earned his PhD from UVA’s Department of Religious Studies. 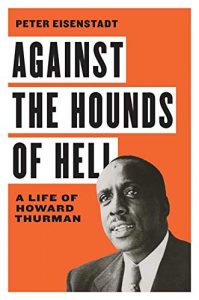 A Life of Howard Thurman

Howard Thurman was a trailblazer in many aspects of his life; he was the first African American to meet Mahatma Gandhi, one of the first and most insistent mid-twentieth-century proponents of racial integration, and an early and outspoken advocate for social and economic justice. It has not been until now, however, that The Hounds of Hell has given him biographical treatment he deserves. In this book, author Peter Eisenstadt explores multiple different facets of Thurman’s life, including his activism and theology.

Thurman was born in 1899, and he was an inspiration to Martin Luther King Jr., James Farmer, and other leaders of the civil rights movement. He was a forward thinker in regard to social issues as an early feminist and environmentalist, but he also opened new doors in theology, becoming a key figure in the emergence of mysticism and spirituality as an alternative to formal religion. Most importantly, Thurman dedicated his career to fighting the “hounds of hell,” which he categorized as the way fear, deception, and hatred impeded the steps of African Americans and the marginalized and disinherited peoples of the world.

“Until now, there has been no standard one-volume biography of this transcendently important figure, one of the most important ministers, theologians, and philosophers of twentieth-century America. Eisenstadt’s magisterial work is the definitive biography of Thurman.” — Paul Harvey, University of Colorado – Colorado Springs, author of Howard Thurman and the Disinherited: A Religious Biography

“With this thoroughly researched and elegantly written biography, Peter Eisenstadt has secured the legacy of Howard Thurman’s life and work. Just as importantly, he offers readers who are just now discovering Thurman a very good idea why the renaissance of this great American’s spiritual wisdom is long overdue. Read the book to learn your history, feed your soul, or change your life. Whatever your reason, Thurman and Eisenstadt will not disappoint.” — Barbara Brown Taylor, author of Learning to Walk in the Dark

“Peter Eisenstadt explores Howard Thurman through a lens only a gifted historian can offer. Eisenstadt shows that Thurman is more than a seminal religious figure; he’s a genuine American icon whose wisdom and cultural importance becomes richer over time. Thurman’s life story has all the elements of a rich human drama. But in the telling by Peter Eisenstadt, every detail is wrapped in just the right historic, cultural and theological context to make it ever more engaging.” — Martin E. Doblmeier, author of Backs Against the Wall: The Howard Thurman Story